Huawei and the global struggle for technological supremacy

The conflict between the Chinese ICT company Huawei and the Trump administration tells us that innovation-policy can be part of a larger struggle for technological hegemony.

By Mark Knell, Research Professor, NIFU, and Per Koch, Forskningspolitikk

The digitalisation of the Chinese economy is an amazing story of economic catch-up. When Intel announced the first commercially practical microprocessor fifty years ago, China was in the throes of the Cultural Revolution. Today China follows a mission-oriented development policy that promotes the digitalization of the economy.

Two prominent telecommunications equipment producers appeared in the mid 1980s: Huawei Technologies and ZTE. Huawei originated in 1986 as a privately-owned enterprise and a group of investors founded ZTE in 1985. Both enterprises are research intensive.

In 2018, Huawei was the fifth largest global enterprise in terms of R&D activity, and ZTE was the 76th largest enterprise, according to the 2018 EU Industrial R&D Investment Scoreboard. Last year, the R&D intensity of Huawei was 14.7% and ZTE was 12.9%. Both were a bit above Alphabet, Apple, Microsoft, but below Intel.

Most people know about the ongoing trade war between the United States and China, but few people understand that this is also about technological supremacy.

The US government had raised concerns over potential ties these enterprises have to the Chinese government or military, and the risks they pose to national security, as early as 2012 in a US House of Representatives report.

More recently, the FBI warned Americans against buying Huawei and ZTE phones in 2018, and the US State department has discouraged European countries from using Huawei 5G equipment in 2019. Finally, on May 15, Trump effectively banned Huawei with a national security order.

Google has announced that Huawei can no longer license Google apps and services, which means that the Chinese company cannot  use the Android operative system on their phones, and that their customers will not be able to access the popular Google Play app store. This will obviously make Huawei phones far less attractive to customers.

It is still unclear how this will play out in practice. The ban has not technically gone into effect. Some reports indicate that the Trump administration may reverse the trade ban.

The US is using tariffs and regulations to weaken Chinese companies and the Chinese economy. This may be a play intended to get concessions elsewhere in return for lifting the bans. Regardless, innovation and technology has been weaponized in a struggle for power and influence.

It should be noted though that the Chinese are no strangers to these kinds of tactics, either. They have provided the Chinese technology sector with extensive subsidies. They have also succeeded in limiting many foreign companies’ foothold in China. This applies, for instance to web services, including social media.

There is also the suggestion that China encourages intellectual property theft and a copycat culture. This narrative may have been true five years ago when US and European patents had little value in China.

In a provocative interview on CNBC (8 Oct), Erick Robinson (Managing Partner of Dunlap, Bennett & Ludwig) suggests that now China has gone from “worst to first in patent protection”. There have been rapid changes in the Chinese legal system. Patent protection is now stronger in China than the United States. Robinson claims that patent enforcement has become overly ridged and expensive for US patent owners.

When the US was catching up

This narrative reminds us of the time following independence, the United States used different forms of protectionism by importing and copying technology to catch-up with Britain. By the end of the Second World War the United States achieved technology supremacy, but then followed a development strategy of “Kicking away the ladder” as Ha-Joon Chang reminds us (Kicking Away the Ladder, Anthem Press). As a country catches up, the Intellectual property rights of the country tends to become stronger.

China is challenging US technological supremacy. The issue of copying and duplicating technology now goes both ways. The United States and China have become increasingly competitive in the software industry, and to the point that they are now copying each other.

Huawei Technologies and ZTE have a strong patent portfolio with leading edge technology. While there may be a legitimate claim to protect certain national security interests, whether in the United States or Europe, the idea of effectively banning a technology leader from American and European markets, violates the free trade narrative.

We might also argue that this kind of ban ignores the way ICT companies and markets work today: There is probably not one single product or app that is completely American, Chinese, Korean or European, as all companies make use of components and ideas developed and sold by others. China, Taiwan, and Japan are prominent in the Apple supply chain.

One disturbing issue that emerges from this technology war is the possibility that a dual global innovation network may develop. Huawei and ZTE are part of a much larger global value chain that includes technology from many different enterprises. Trump’s ban will effectively shut out those enterprises and may strengthen the development of an alternative Chinese dominated market.

It is unclear how these battles will end. The Trump administration is pretty unpredictable at the moment. What is clear is that innovation policy increasingly is becoming part of the tools used in the global struggle for political, technological, and even military supremacy. The win-win narrative of global trade is being replaced by a winner-takes-it-all narrative. There is no reason to believe that this will lead to more or better innovation.

Photo: Huawei recently put up large posters marketing their new phone at the Nationaltheater station in Oslo. They have not given up the smartphone market, in spite of the new American policy. (Photo: P Koch) 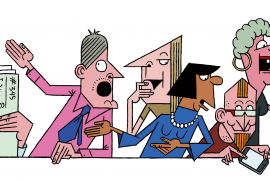